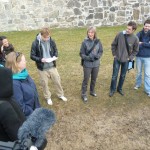 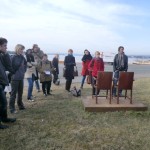 Participants discuss the Monumen for the Deported Norwegian Jews 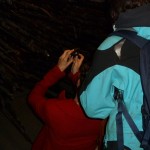 Participant takes photo for an “Mini Exhibition” in the Hjemmefront-Museum 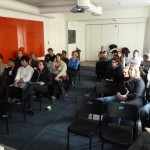 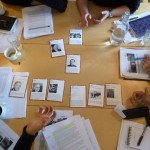 Participants work with a card method in the HL Senteret

Yesterday, March 28th, 2012, the Third TeacMem Seminar in Oslo finished its exploration of Norwegian Memory Culture and of Educational Methods for addressing them in competence-orientated history classes.

From March 25th to 28th, Students in Teacher Training and Multicultural Education from Oslo, Copenhagen and Hamburg together with teacher trainers, teachers, museum and memorial educators and researchers worked and learned together both in the Oslo Landscape (Akershus Slott) and within museums (Hjemmefront Museum, HL Senteret) as well as materials developed within the TeacMem Project for a historical learning orientated to Historical Competencies follwing the GermanFUER-Model (Schreiber/Körber et.at 2006; Körber/Schreiber 2007).

They explored different forms of Norwegian Memory Culture, discussed about their potential for historical learning based on a lecture by Prof. Dr. Andreas Körber on concepts of memorial culture.

Among the forms of commemoration addressed were the Norwegian hjemmefront museum, the exhbition at the Holocaust Center and (via a presentation by the colleagues from the Museum Vest Nordsjøfartmuseet) the exhibition and the educational programm in Telavag (near Bergen).

Examples were not only related to Norwegian memory culture, but e.g. also addressed subject of German-Scandinavian Relations, such as the White Buses Rescue Operation of the Swedish Red Cross and Danish Jutland Korps under Count Folke Bernadotte at the End of WorldWar II bringing hundreds of Scandinavian prisoners back from German Concentration Camps, which was and is subject of contented and ambivalent remembrance. Examples, Concepts and Methods were presented by members of the HL Senteret in Oslo, the European Wergeland Center, Neuengamme Concentration Camp Memorial in Hamburg (Germany), and Copenhagen University College Capital.

The pictures in this post give a few impressions of the group’s work.